Dragan Spaseski Ohridski: My wish is to continue the path of Mikhail and Eftihius 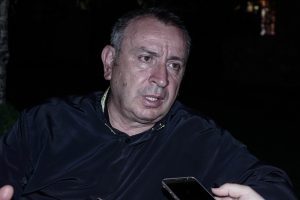 Multimedia project with fine artwork by Macedonian artist Dragan Spaseski Ohridski was opened last night in the church “St. Sophia” in Ohrid, within the 57th edition of the Ohrid Summer Festival.

– These exhibits are surprising. It has a large cycle of mother and child. It is a cycle of Christ and the Mother of God. It’s a cycle of an ordinary person. In the church “St. Mary-Perivlepta” it has one of the largest such cycles in the world, the work of the great painters Mikhail and Eftihij. And there are painted about 30 scenes from the Nativity of Christ, said Academic Grozdanov.

Speaking about the author, academic Grozdanov said that he knows the thirties, and maybe more years. According to him, Dragan Spaseski-Ohridski is an incredible reader who constantly reads the theory of literature, literature, poetry, prose, but also painted.

– This cycle “Mother and Child” shows that Dragan Spaseski Ohridski wants to correspond with the spiritual. He is a modern artist in a modern sense, but he is not a simulator. He is an artist who returns to antiquity, the Renaissance, neoclassicism, until nowadays, and does not repeat anyone.

The author of the multimedia project explained that “The man is trembling and the angel is trembling, and you are my God …” is actually a cross section of his work so far, and his desire is to continue the creative path of the painters Mikhail and Eftihius.

– My wish was to continue the path of Mikhail and Eftihius. As a bee I go from a flower to a flower, I gather everything that is most important in a civilizing sense and I put a copyright stamp on what I create, without it being important whether it is trendy or not Is whether it is paid or not. Simply, I follow my path to the spiritual, the fantastic and the erotic in painting. It is a part of the project. The other part is the promotion of a book with the same title, which for legal reasons, for the opening of the exhibition was not presented, but will be presented in another part of this exhibition, said the artist Dragan Spaseski Ohridski.

The exhibition with his works will be opened in the church “St. Sophia” until August 20th. The numerous visitors at the opening, according to academician Tsvetan Grozdanov, “show how much the author is valued as a friend and fellow citizen.

The artist Dragan Spaseski Ohridski is a great presenter of Macedonian art outside the borders of the country. He is one of the first authors to present himself with multimedia projects before the art lovers at the end of the eighties. Behind him there are more such projects starting from “Apocalyptic Narcissus” that was introduced in 1989. For the next year, this extremely valuable, fruitful and interesting artist, announces a great architectural project. By profession, Dragan Spaseski Ohridski is a doctor-specialist orthopedic surgeon.