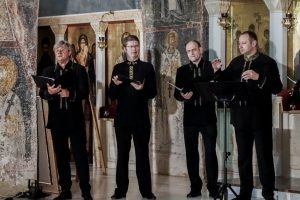 The male monastery choir “Pustina Municipality” from Russia last night filled the church “St. Sophia” performing within the music program of the 57th edition of the Ohrid Summer Festival.

– We are performing for the first time in Macedonia, and for the first time we are part of the Ohrid Summer Festival, so this is a new experience for us. The church itself where we performed has wonderful acoustics. It is particularly suited to our type of music, so our common impression is that we made a great composition and that the audience really enjoyed the performances, say the members of the male church choir.

Serbian soprano Sanja Kerkes also performed for the first time at the Ohrid Summer Festival, although for more than two decades she is a permanent guest in the Macedonian Opera and Ballet with various roles.

– I am extremely pleased to have performed at “Ohrid Summer” with such an ensemble, such a choir, composed of top artists, academics, music educators and all are soloists. This was something magnificent, to sing spiritual music in this space, though, I must admit that it is not my tray. It was a bit hard for me to hear this kind of harmony because I’m used to an orchestra, instruments, and not that kind of an aapela. It’s not easy, but of course you must have some experience, explains soprano Kerkes.

Macedonian soprano Milena Arsovska is 10 years old again in the church “Saint Sophia”. As she says, she is satisfied with the audience’s response which followed the concert with great care.

– The audience was great and after such a concert I’m really very fulfilled. I have been living in Vienna for ten years, but I travel constantly because I work in Germany and the Czech Republic. In Macedonia I had a recent concert with the Macedonian Philharmonic, and the last time I performed at the Ohrid Summer Festival at the concert with Duke Bojadziev. Before I moved out of Macedonia, I was part of the Macedonian Philharmonic, and every year I was part of the festival. However, today, for so many years now, I again felt that magic, says Arsovska.

The male choir “Pustina Municipality” was founded in 1996 within the monasticism of the Optina Pustin area in St. Petersburg. From the very first days of the foundation, the choir constantly upgrades its repertoire consisting of old and new ecclesiastic singing. As a result of their work, numerous manuscripts that existed in various academic libraries in Russia and in the world were discovered and performed, and their concerts include singing not only from Russian tradition, but also from the orthodox traditions of Greece, Bulgaria, Serbia and Georgia, as well as Modern arrangements of old songs and religious compositions by Russian composers.

The founder of the choir and his artistic director Aleksandar Semenov graduated from the choir conductor of the Conservatoire in St. Petersburg, advanced in the field of orchestral conducting, and studied the old-Russian musical notation.

In the 20th century, the choir performed in more than 30 cities in Russia, and has toured in Belgium, Hungary, Germany, the Netherlands, Spain, Italy, China, Colombia, Norway, Serbia, Montenegro, Finland, France, Sweden, Estonia And Ukraine.

Their concerts were held in the Cathedral Church of the Kremlin in Moscow, the Cathedral “St. Sofia “in Nizhny Novgorod and Kiev, in numerous cathedral churches in western Europe, as well as in many concert halls.

In 2006, the publishing house “Warnermusic” released a CD recorded with the Italian ensemble “Solistievene” and Claudio Shimone, and in the current discography of the choir, 14 other albums were inscribed.