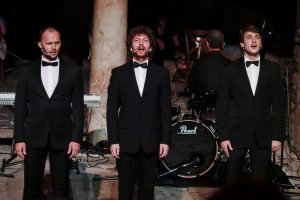 Instead of masks, the actors from this theater, with songs, music and dance, entertained the audience for almost two hours, separating it from everyday life and carrying an artistic odyssey with retro show, but in a modern rhythm. The chemistry between the stage’s toppers and those who clapped in particular came to the fore in the second half of the concert show that brought a quick and cheerful rhythm.

Medea Marinescu is one of the actresses who left a strong impression last night. She was pleased with the performance before the Ohrid audience, but also delighted with the ambience in which the show took place.

– This kind of performance magically fit into the ambience where we performed. For the first time we play in open space, so before we came in, we wondered what the scene would look like. When we perform this show in Romania, the audience sings and recites with us. Here, the audience does not understand the Romanian language, but that’s why she “set off” when music and rhythm set off. Although we had a lot of text in Romanian, I still think the audience understood something, said Marinescu.

Actress Aileen Qadir on the stage captured threads from the Bucharest romances, portrayed in her authentic and mysterious way.

– The place where we performed is most appropriate for this concert show. It’s a very different show when we play it in our theater. Simply the atmosphere here is beautiful due to the architecture and the very location of the church. Although we have been playing the project for two years, the performance in Ohrid was different. Otherwise, I am for the first time in Ohrid and Ohrid Summer, but I heard about the city and the festival last year from my friends from “Art Orchestra”. They told me many beautiful things about Ohrid, in which I have made sure myself, said Qadir.

At last night’s concert show, actors Eduard Adam and Larry Giorgescu were telling stories about life and art, but not with words, but with pantomime, improvisation and interesting choreography.

– The place where we performed, the church “St. Sophia” gave us strong energy, but also something new in our game. I am very sorry that we do not have much time to stay and be part of the festival’s audience, so we can exchange views with colleagues from different countries, said Adam.

Musical surprise at the concert show “Magic Nights” at the National Theater “I.L. Karagiale “from Bucharest were the youngest members who accompanied the dozens of instruments on the stage brought the most gritty and most rhythmic part of the concert.

PrevПретходно“Magic National” tonight at “Ohrid Summer”
СледноDragan Spaseski Ohridski: My wish is to continue the path of Mikhail and EftihiusNext