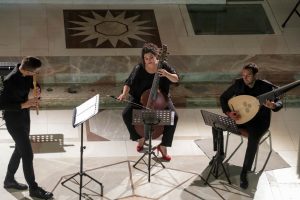 A loud applause, standing ovations and smiling faces could be seen in the church “St. Sofia “after the concert of the French ensemble” Maskerina “on the French evening within the festival” Ohrid Summer Festival “.

It was a unique opportunity to hear Sebastian Beretta, Marie Guillaume and Nicolas Vati, whose basic interest is precisely Baroque music. In this program concept, although most of the works were dedicated to the trio, each instrument had a solo performance and its central place.

The team of the Ohrid Summer Festival expressed their gratitude to Christian Timonie, the French ambassador for support from the Embassy of France and the French Institute.

– I enjoyed the concert, but now after the concert I’m really very excited and a little tired. It takes a lot of energy to play the whole concert, we give it all the way to the audience. For the first time in Ohrid and at the festival “Ohrid Summer”, this is an extraordinary experience. For me as a Frenchman, this is a different experience, you have a different history and architecture, everything is magical. Time and people here are very fond of me, unlike us Frenchmen who are much colder, says Marie Guillaume from Maskerina ensemble.

And for the artist Beretta, the concerto has gone as expected.

– I am really trembling after the concert because the whole organization for our performance and the performance itself were in the best possible way, just as I wanted and expected. From all this, the most to me touched that we had the opportunity to play Baroque music in a sacred place, in an Orthodox church, because I am a Serb and I am an Orthodox Christian. Although I grew up in Bosnia, I am now coming for the first time in Macedonia, also in Ohrid, but I have many friends, Macedonians. I especially like the history and the architecture, so I fell in love with the city of Ohrid, abounds in ancient, ancient buildings. I was surprised when during the concert I looked at the audience, there were people of different age, I like the spirit of the Macedonian people and culture, says Sebastian Bereta.

According to Nicholas Watty, the feeling that artists from this ensemble experienced on the podium in “St. Sophia” can not be described in words.

– It’s a rarity to perform in such a concert hall. I am satisfied and satisfied, the audience has delighted me. For the first time in Macedonia and I am delighted with the Ohrid Lake and the festival, I will definitely come again, says Nicholas Vati.