Milenkovic: We will offer an attractive and quality program for the audience of “Ohrid Summer” 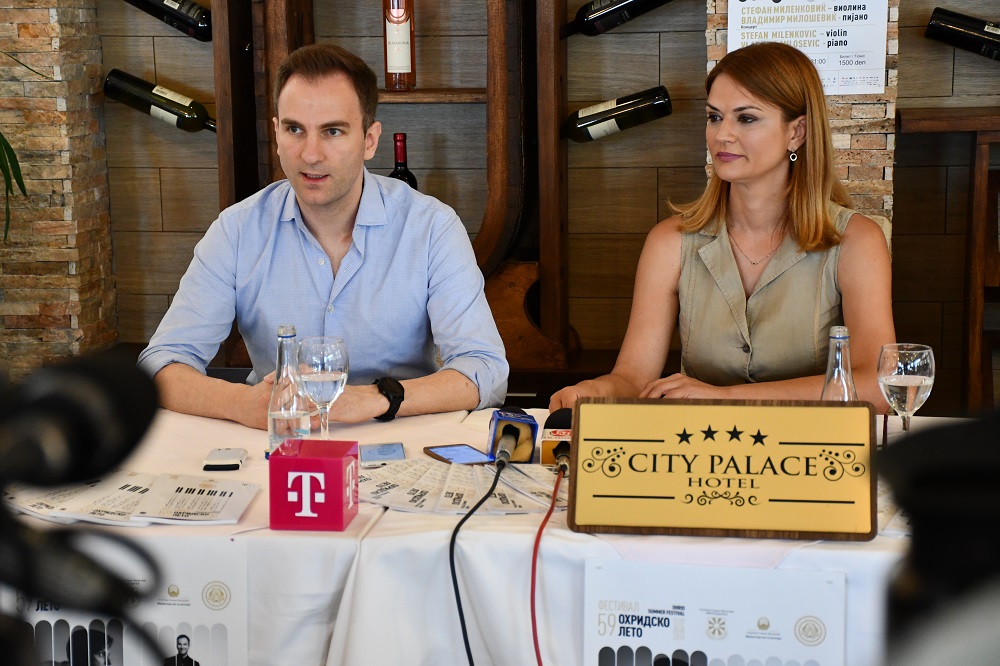 The great violin of world renown violin, Stefan Milenkovic from Serbia, tomorrow will hold a concert within the Ohrid Summer Festival together with his colleague, pianist Vladimir Milosevic.
As the director of the National Theater “Ohrid Summer” Natasa Popovic pointed out at today’s press conference, this is an artist who is a favorite of all generations, and who always takes concerts for the memory of the audience.

-Stefan Milenkovic in Serbia brings titles for the Artist of the Century, the Most Human Personality, Person of the Year and is one of the most famous artists who is building a career in the world’s scenes. As one of the most talented artists in this region, Stefan Milenkovic has performed on the most prestigious concert podiums in the world, solo or with numerous orchestras under the conductors of Sir Nevil Mariner, Lorin Mazel, Vladimiir Fedoseev and Daniel Oren. I am convinced that tomorrow’s concert will be included in the list of the best concerts in the festival history of the Ohrid Summer Festival. Stefan Milenkovic will perform together with Vladimir Milosevic who is one of the most prominent Serbian pianists of his generation, said Popovic.

Violinist Milenkovic did not hide the pleasure that is again in Ohrid, where, he said, there are wonderful memories of childhood and many friends. For the concert he will hold tomorrow, he announced that it is a well-chosen, summer, but quality program.

-We hope that the concert will appeal to the audience tomorrow because it is an attractive program. It will have everything from a bit. All the works that we will play are very important. We will start with the concrete Sonata No. 1, his first sonata with a lot of energy, a masterpiece because he did not publish anything that was not perfectly prepared. Then there will be one ballet, “The Kiss of the Fairy” by Igor Stravinsky. From it was made a suite in a short edition of 20 minutes. In the second part we start with a Macedonian premiere, works by Italian composer Nicola Campogrande with a work that he wrote after a copy of Paganini, more precisely inspired by Paganini, and performed in a contemporary way of violin and piano. Then will be the work “Legend” by the Polish composer Henrik Vianevski. In the end, we will play a roll-scherzo by Peter Ilich Tchaikovsky, announced the Serbian violin virtuoso Stefan Milenkovic, not revealing what kind of annoyance he prepares for the audience that will monitor their performance tomorrow evening.

His colleague, pianist Vladimir Milosevic, noted that he is performing for the first time at the Ohrid Summer Festival, but regularly follows and reads about the festival program via the Internet.
– “Ohrid Summer” is one of the most important festivals in this part of Europe, and it is therefore very important to perform here. Every year I follow the program online, and I am glad that there are excellent concerts and fantastic artists, said Milosevic.

Ohrid Summer’s director Natasa Popovic said at the press conference that after eleven days from the start of the 59th edition of the festival with the spectacular concert of the great violinist of today, Vanessa May, who was looking for a map more, Ohrid, during In the past days, it’s the true city of culture through the festival concerts that have reached the last place.

-We had remarkably talented and masterful artists who brought unforgettable evenings for the audience we have from all the world’s meridians. The Polish evening and the evening of the European Union were held together with outstanding artists, and last night the festival audience was impressed by the Fame of Georg Friedrich Handel, who performed the Italian ensemble “Dorico” perfectly mastering the baroque instruments. The festival audience had a rare opportunity to enjoy in the beautiful ballet performance “Libertango” at the National Opera and Ballet of the Republic of Northern Macedonia that took place in the reconstructed stage “Dolni Saraj”. Also, the drama program has generated great interest among visitors. The viewpoints for the performances were filled to the last place, which gives us the right to evaluate that we have made a quality program with which we continue the trend of successful festival editions, said the director of the Ohrid Summer Festival Natasa Popovic.

The concert of Stefan Milenkovic and Vladimir Milosevic will be held tomorrow in the church “St. Sophia” starting at 9 pm.