“Ohrid Summer” – a special inspiration and love for the artist Bozhikov 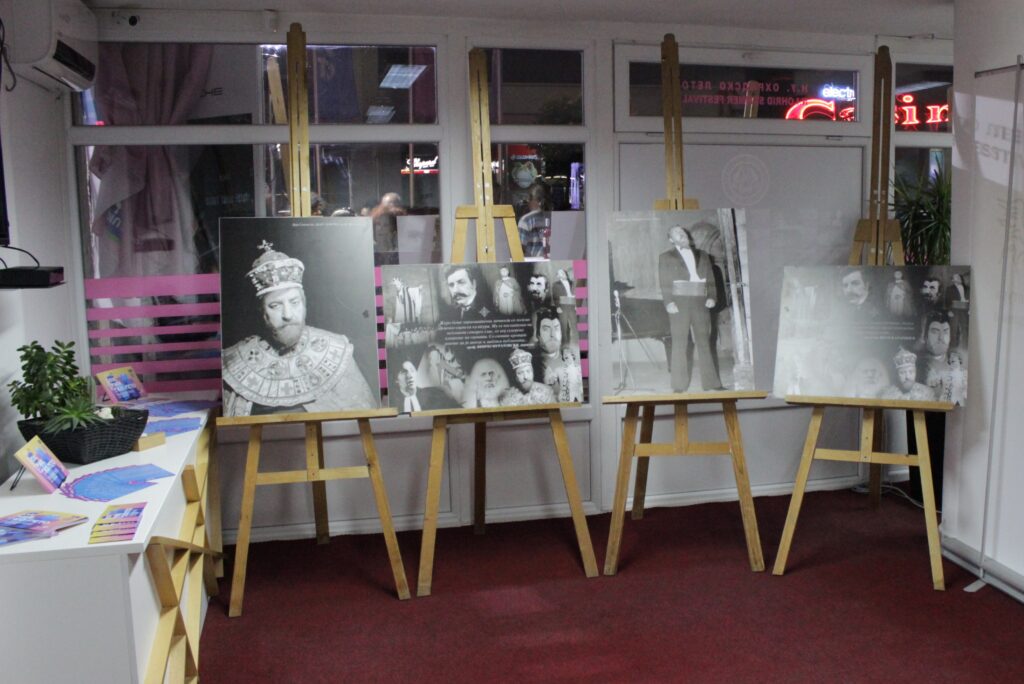 An exhibition of photographs “From the art opus of Georgi Bozhikov” was opened last night within the framework of the “Ohrid Summer Festival”. There are 15 photographs from the opera roles of the legendary Macedonian vocal artist in the head office of the  Festival .

– Tonight, we have this special opportunity through the exhibited 15 photographs of his opera roles, to recognize the power of visual transformation of Georgi Bozhikov. The music, which actually speaks of his full contribution and top professionalism in the creation of each of the interpreted characters. Tonight there are some of his favorite characters – not only in artistic but also in human sense, everyone discovers a new dimension of Zoro’s love and devotion to everything that is Macedonian: King Samuil from the opera of Kiril Makedonski, Goce Delcev from the opera, , Ilinden “by Trajko Prokopiev, as well as his last premiere role, Bolen Dojcin in the same name opera by Risto Avramovski, was said last night at the opening of the exhibition.

Among the exhibited photographs are other transformations of Bozhikov in roles that he sang on the stage of the Macedonian National Theater, as well as on the opera scenes in the former Yugoslavia and in Europe.

The Ohrid Summer Festival which continues in the most natural and highly creative manner continues the traditions of Ohrid as a spiritual center in these regions, and at the same time one of the European and world cultural hotspots, was especially attractive for Macedonian artists, including Bozhikov.

-The legendary Macedonian vocal artist, bass Georgi Bozhikov is undoubtedly one of those artists, for whom Ohrid and the Ohrid summer  festival were a special inspiration and love. The fact that starting from the first two of his performances in group concerts with works by Macedonian authors, in the period 1964-1986 or for more than two decades, Georgi Bozhikov performs at the festival stages sixteen times, was pointed out at the exhibition.

The performances of the outstanding bass Bozhikov at the “Ohrid Summer” as it was said, always caused spontaneous outbursts of excitement and strong ovations and applause by the festival audience.

-Still under the vaults of the magnificent “Saint Sophia” church , the voices and memories of the spiritual romantic subtlety of Schubert and Schumann are heard … The passionate enthusiasm in the works of Tchaikovsky, Mussorgsky and Rahmaninov … The fascinating interpretation of the numerous solo songs by Macedonian artists … The “Records” of Tomislav Zogravski, “The Death of Goce” by Trajko Prokopiev, “The Monologue of Dojchin” by Risto Avramovski, remains unforgettable and unrepetiable …. In fact, there is no solo – song from a Macedonian composer, 1986 – or – before his early death, which Zhoro has not sung, was said last night at the opening of the exhibition “From the Art opus  of Georgi Bozhikov”.

The Firstling at the Opera of the Macedonian National Theater, Georgi Bozhikov was born in Petrich, Republic of Bulgaria, on April 15, 1931. His extraordinary musical talent and the ability to play on multiple instruments is revealed from the earliest age, which clearly determines his future path to a musician. He graduated at the Conservatory in Sofia, after which he debuted with great success on the stage of the Sofia Opera.

In the spring of 1963, he comes for the first time in Skopje, where his sister Milka Bozhikova already lives. Infused by the thought that it must be a part of the Macedonian music culture, in 1964 he became a soloist and later the firstling  of the Opera at the Macedonian National Theater. Until his sudden death in 1986, all bass parties were realized on the stage of the opera house. His interpretative opus marks thirty-four opera roles.