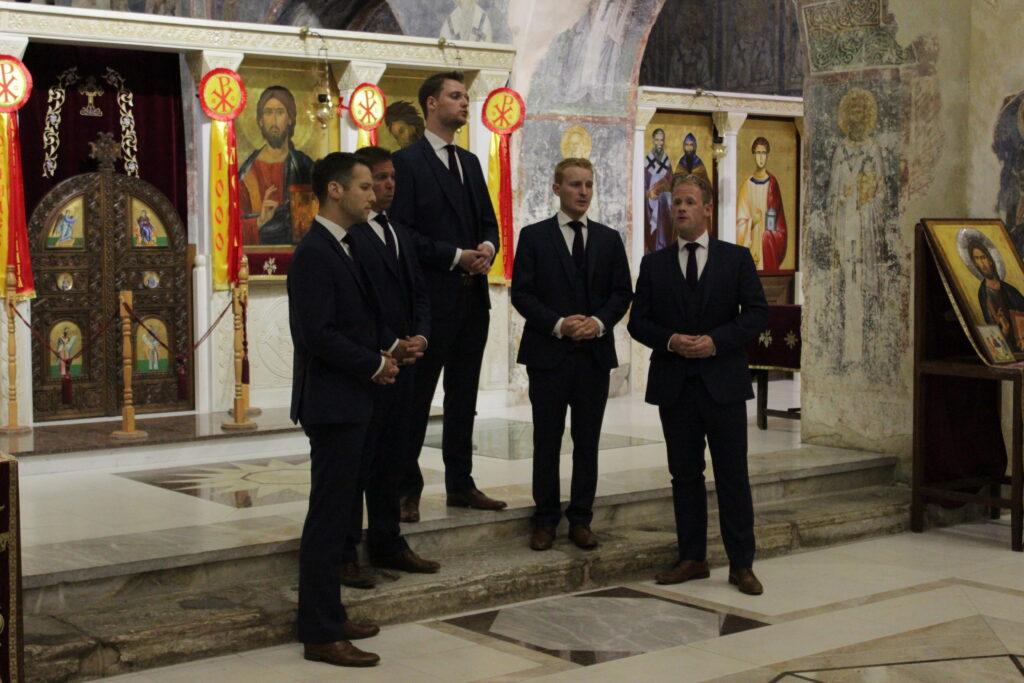 The perfect performance of the members of the a capella sextet ” The Queen’s Six“ which last night in the cathedral church “St. Sophia” made an unforgettable concert for the numerous audience. With their a capel singing, uniqueness and attractiveness as well as constant communication with the audience caused the visitors to admire them. The counter tenors Daniel Brittain, Timothy Carleston, the tenors Nicholas Madden and Dominic Bland, the baritone Andrew Thompson and  the bass Simon Whitelay say that the program was chosen to fit everyone’s taste.

-We presented ourselves with a mixture of music, ranging from sacred to modern combinations or trends. It is a repertoire appropriate for each listener. The ambient in the church “St. Sophia” is very unique for anyone who visits this sacred temple and is very unusual and different from the English churches. It has incredible art drawn on wall frescoes and it is very impressive and specially for us. Also, the acoustics are very specific and suited for the singing of our group, says Brittain.

– An unusual event, the highest possible level of a capella singing, intonation, dynamics, brilliance, synchronization between voices, perfection of the performance of the whole composition, great program, enthusiastic audience. As a music selector I am overjoyed for the wonderful unusual event in the church of St. Sophia, says Ristov.

The audience did not hide their impressions of the performance of artists who regularly present themselves to the Royal Family in the UK.

– The concert was wonderful. This was the start that was expected for the “Ohrid Summer”. It was really a royal sextet, especially with the repertoire itself. They were perfect. These are artists of the world rankings, with great experience, and especially appreciate, whenever foreign artists come in to establish such contact with the audience. It’s not just respect for the audience, but also for the country they came in. That always gave me the impression, and especially now, everything was done remarkably, says Panda Zografska-Belichanec from the foundation “Tomislav Zografski”, which is a regular visitor to the Ohrid Summer Festival since 1965.

Particularly impressive was the gesture of the artists who after finishing of  the concert sent all the visitors handing themselves to the entrance of the church. The audience is thrilled and surprised. Some of them commented that they were honored by the gesture, artists are handling the concert guests.

– These are real artists, they have given us unforgettable moments and have respected us as a real festival audience, was the response of the visitors.

The members of the “D” Quinn Sixs “sextet are part of the professional singers, called Lay Clerks of the” St. George “, who live and work in the Windsor Palace in the UK. They own high music standards and regularly perform in front of the Royal Family.

The repertoire they perform is quite versatile, and apart from the works of early music history, it includes works of folk music, as well as arrangements for works of pop and jazz music.

The members of this sextet stay for the first time in Ohrid and the Ohrid Summer Festival, but they say they came up with positive impressions from their friends who had previously visited the city.

-We are impressed by the beauties of the city, the beautiful churches, and we saw the fortress in the old part of Ohrid, said the members of the a capella sextet “The Queen’s Six”, who have  been registered in  the festival history as unique and especially attractive artists.