Premiere at “Ohrid Summer”: “The King Lear” through the prism of the remarkable Diego de Brea 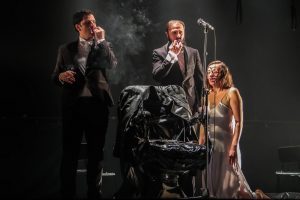 Produced by the renowned Turkish Theater from Skopje, and within the framework of the drama program at the Ohrid Summer Festival, one of the most famous Shakespeare plays “King Lear” was premiered last night.

Top director Diego de Brea, who has already been proven in Macedonia, has shown King Lear in his own, authentic and admirable way. Through the play, Lear explores the human journey in the darkness and abyss of death. Through this project, in an unusual and authentic way, as the director and the actors know only, it was shown how the old king gives up authority and power.

The main character is played by actor Jenap Samet who says that the process of preparing the play itself, although the exhausting, was still a phenomenal.

– The character and role of King Lear requires great pre-preparation and dedication. The preparation for the show lasted about four months, and I joined about a month ago until the premiere, which is a really huge challenge and a difficult task. The preparation process was phenomenal, although it was too exhausting. The experience with director De Brea is a unrepetiable and unique experience and I think that every actor should experience such unusual preparation at least once in his career. The director is rare in a word, I’m not saying that he is so different, but his system of work is different. He likes feelings, but also a complete psychological analysis. Unlike all other versions of the character of Lear, this time the King is significantly younger, but these are some old thoughts. Diego de Brea’s direct lives, according to him, this is not a theater, but a life, because it happens, said actor Samet.

The Turkish Theater from Skopje is a frequent guest at the Ohrid Summer Festival. Former theater director Atila Klinche, who is also the organizer of the “King Lear” project, is pleased with the festival audience that comes each year on their performances, as well as from the management of “Ohrid Summer”.

– The Turkish theater has excellent cooperation with the festival “Ohrid Summer” and, of course, with the dramatic selector Zoran Lutkov. As a result of this long-standing collaboration, the “King Lear” premiered right on this 57th edition of the festival. The Turkish Theater has a positive feedback and a contact with the audience of the “Ohrid Summer”. There was Constant attendance of our other performances at this festival. There is also a special contribution to this, and the provided translation of each of the plays, which brings the theater closer to the audience of different linguistic background, explains Klince.

The play “King Lear” is a project approved by the Ministry of Culture for the year. Even before being premiered in Ohrid, the Turkish Theater received invitations for cooperation and participation with this drama at festivals in the country and beyond our borders. The next performance will be held in October in Novi Sad, Republic of Serbia, within the first edition of the Festival of Minority Theaters.