Spectacular concert for the beginning of Ohrid Summer 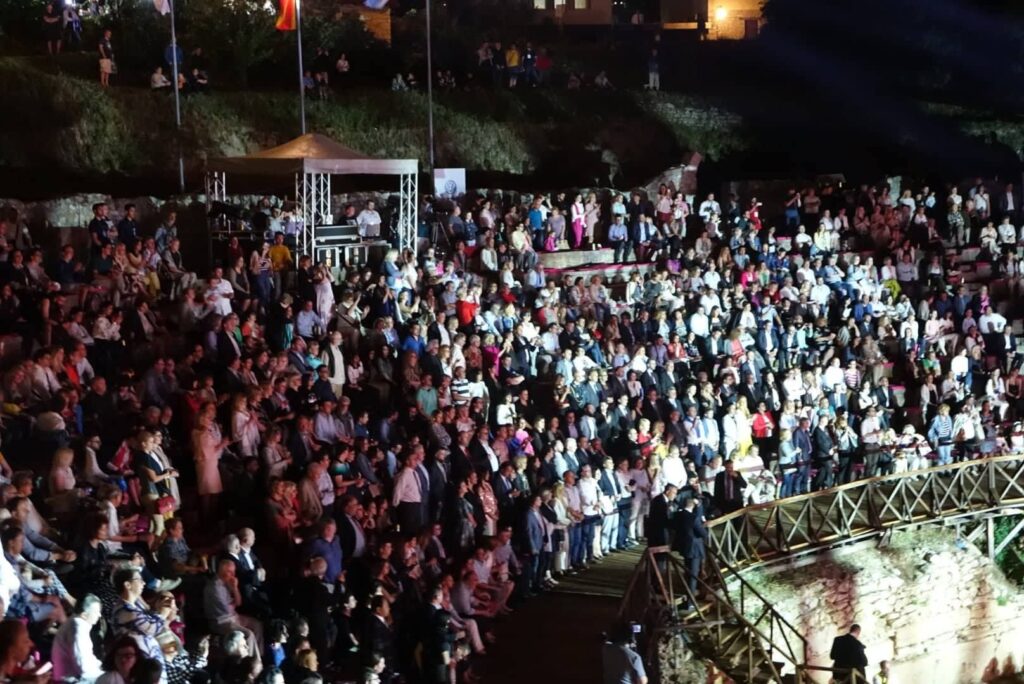 With the spectacular concert of the  great opera diva Elena Mosuc, started  the 58th edition of the festival “Ohrid Summer”.

The festival’s history became richer with the names of the opera stars, the famous world soprano Elena Mosuc, the tenor Calin Bratescu and the conductor Nicolae Moldoveanu who arranged a spectacular opening of the 58th edition of the “Ohrid Summer” at the Antique Theatre in Ohrid.

The grandiose appearance of the two opera stars under the conductor’s baton of maestro Nicolae Moldoveanu, accompanied by the Macedonian Philharmonic Orchestra, once again confirmed the reputation of Mosuc as one of the most diverse and most expressive sopranoes in the world, as well as the artist Bratescu, as one of the most brilliant tenors of today . The audience who filled the great Amphitheater enjoyed the most famous and most popular opera arias by Giacomo Puccini, Charles Gounod, Pietro Mascagni, Vincenzo Bellini and Giuseppe Verdi. As a special surprise opera diva Mosuc performed the composition “Macedonian Girl”, which impressed the visitors of the Antique Theatre

Proclaiming the festival “Ohrid Summer” as open, the President of the Republic of Macedonia Dr. Gjorge Ivanov, who is the patron of the biggest Macedonian cultural brand, said that the artists who will perform at the festival  will bring with them the world, and then, in the world, will carry Ohrid as an Macedonian mirror of European culture.

– From today on, the world is in Ohrid and Ohrid is in the world. Music and art have always helped  the man, when he is weak , to be strong, and when he is poor, to be rich, and when he is in the shackles, to be free, and when he is afraid, to be encouraged.  In that language of truth, there is no space for the lie. In that language of love, there is no space for hatred.  After all, the two most famous songs in the history of the world are dedicated to love. The song above the songs, written by the Old Testament Solomon, and the anthem of love composed by the New Testament Paul, said President Ivanov.

President Ivanov reminded on Jean Monnet, one of the fathers of Europe, who said that if Europe needs to be re-created, it should begin with culture and art.

-This Monnet’s thought applies not only to Europe, but to all geostrategies that are tailored in world power centers, especially because  this year are celebrated 70 years of the Universal Declaration of Human Rights. One of those rights is the right to participate in the culture and enjoyment of art, added the patron of the Ohrid Summer Festival, the President of the Republic of Macedonia, Dr. Gjorge Ivanov.

At the opening ceremony of the festival “Ohrid Summer”, which is held with the financial support of the Ministry of Culture also  addressed the Minister of Culture Asaf Ademi who said that exactly this festival which exists   58 years , speaks in the most universal and the most blessed language..

-Art is the universal language of the world. They say that language is invented by man to express his feelings, but he realistically uses it more to hide them, to lie, to kill. Only in the language of the art is everything sincerely, purely … divinely. This festival, born and raised in this civilizational fireplace, in our Ohrid, 58 years speaks with the most universal language, the most sincere, the most blessed, and will continue to live much longer than other languages, which conceal the feelings, pointed out  minister Ademi.

This year, the festival’s artistic message was broadcast by the Macedonian actor Nikola Ristanovski, who emphasized that art will not surrender, because as he said that it is the last deck where people are together, while timeless Ohrid is it’s main harbor.

– The art is the last humane Internationale. Her deck is the last place where we really are together. On her boats, the sails of beauty, gifts, transparency, freedom and simple faith are crossed. A faith of a child who for a moment only interrupts the childhood game to tear a piece of bread in order, not to forget  about life. The one who really does, emphasized the player Nikola Ristanovski, who presented this year’s artistic message to the “Ohrid Summer” festival.

After the grand concert of Mosuc and Bratescu, followed a spectacular fireworks over the Ohrid sky, a tradition that had been interrupted for many years.

The story of a successful cultural magic that has been there for 58 years and reaches the highest peaks in music and drama art worldwide, this year will have another 40 festival nights filled with 46 events featuring over 800 artists from 27 countries of the world . There will be sound and famous names from the world of music, but also the best theatre productions with outstanding drama  projects. There are also three exhibitions, art exibition, photo exhibition and an exibition of contemporary jewelry.