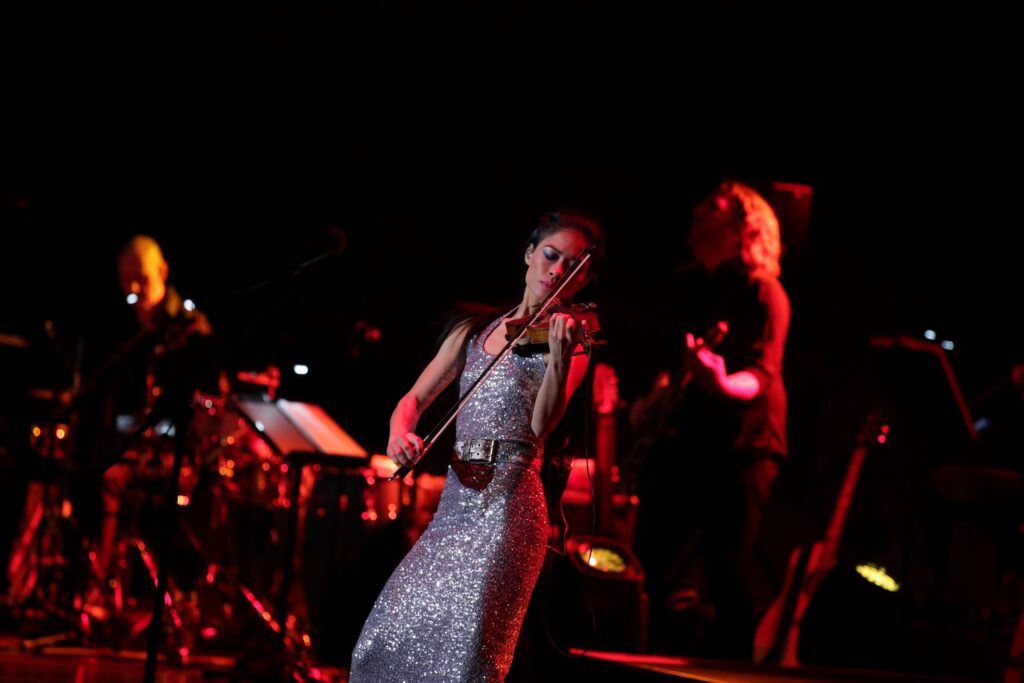 With the spectacular concert of the world famous British violinist, Vanessa Mae, the 59th edition of the  “Ohrid Summer” festival was opened last night in the crowded Antique Theater.

Announcing it open, the President of the Republic of North Macedonia and the sponsor of the festival, Stevo Pendarovski, emphasized that in the next 40 days we will be citizens of another common homeland in which, as he said, there is room for everyone, both for the vulnerable and for the excluded and disadvantaged, and spoken in a universal language. That fatherland, the president emphasized, is the art that exists from the beginning of humanity and its boundaries are drawn by human creativity.
– Vanessa’s voice is a loud testimony that instead of being excluded, the various cultural influences can be complemented by creating greater value. And perhaps because of this, her music reconciles and connects millions of people from different nations and generations, said the President of the Republic of North Macedonia, Stevo Pendarovski.

President Pendarovski emphasized that art should inspire us to brave endeavors.
-We develop a culture that will reflect the richness of our various traditions, here, in North Macedonia. To cultivate deep respect and responsibility for the nature entrusted to us to keep. This is especially true of the indispensable natural and cultural heritage of the Lake Ohrid region. We must do everything in our power to preserve the status of Ohrid as a UNESCO city. Let’s make room for others in ourselves and strive for true civil reconciliation through justice and forgiveness. Building a society for all, let’s remember that we belong to each other and together we belong to the wider European cultural and civilization space, said the President of the Republic of North Macedonia, Stevo Pendarovski, declaring open the 59th edition of the festival “Ohrid Summer “.

Minister of Culture of the Republic of North Macedonia Husni Ismaili in his address said that the festival “Ohrid Summer” is the largest ambassador of culture in our country.

– And this year, here we are here in the grand Antique theater where even two millennia ago the art was spreading. Today’s artists, faced with new challenges of modern times, proudly continue their traditions, break taboos, overcome prejudices, and chant the most universal language of humanity – “art is freedom.” “Ohrid Summer”, as the greatest ambassador of culture and art in North Macedonia and the world, in addition to the affirmation of the world values, gives strong support also on the domestic scene which with each of its performances confirms that it is part of the European perspective of the country and the strongest weapons that easily reach and the European heights, said Minister Ismaili.
The artistic message of the festival “Ohrid Summer” was sent this year by the theater and film director Aleksandar Popovski, who dedicated his address to the recently deceased playwright Goran Stefanovski who has already been incorporated in the festival history.

It can not live like this. Millions live in bunkers.  They peek out through a shot point of a sniper.  There is no life if a person thinks everyone is against him.  That the world is one big conspiracy.  There is also love, kindness and honest people in the world. We think that  it’s hard for us. It’s hard for the whole world.  All people miss something. All people feel that they are surrounded by enemies. South does not love the north, the east does not love the west, Europe does not love America, Ireland – England, the people of Prilep do not smell with them from Bitola, in the same city, two neighborhoods are not tolerate themselves, in one neighborhood – two buildings, two entrances are bloodied  each other in one building, in one entrance – two apartments, one apartment – two families, in one family two people, and also they both persons hate themselves . Where does this leads? If so, there is no salvation. And without salvation, there is no life. And without life … there is nothing. There is death, said Popovski.

At the crowded Antique Theater, the world famous  artist demonstrated her virtuosity and her original approach to the violin playing a fusion of classics with jazz and electronics, bringing thereby the classical music closer to the wider audience.  At the opening ceremony there were representatives from the state leadership in the country, ministers, deputies, ambassadors, as well as a huge number of domestic and foreign audiences.