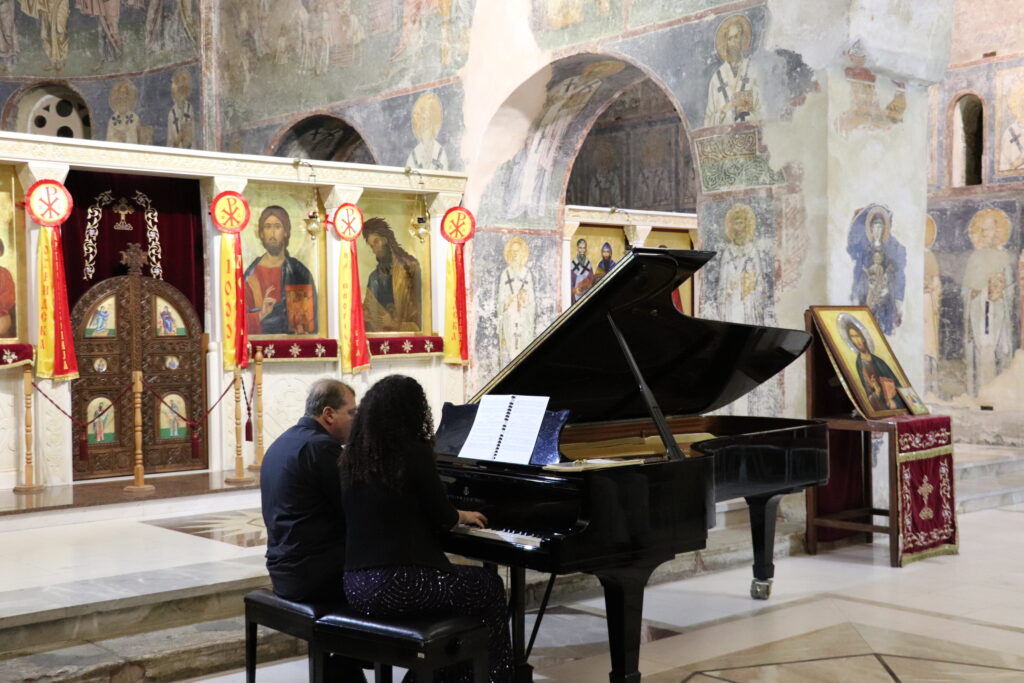 Classical music lovers enjoyed the performance of top pianists, Ivo Varbanov from Bulgaria and Fiammetta Tarli from Italy, under the dome of the acoustic “St.Sophia”.

The concert brought real magic, energy and positive vibrations across the space.

– At the concert we had works by two composers. Brahms and Stravinsky. The first hour was dedicated to two sets of love songs from Brahms, “Love songs” and “New love songs in the form of waltzers” written for piano four hands and four votes. The rest of the concert was dedicated to Stavinski, “Dedication to the Spring” for a four-piece piano. I think that this is one of the most interesting works written for fulfillment with four hands, said Varbanov after the concert last night.

Varbanov and Tarley are for the first time in Ohrid. Amazed by the beauties of the city and the church of St. Sophia, the feeling is especially to be performed before our audience.

– I’m in Ohrid for the first time. The place is wonderful. Among other things, I play for the first time in an Orthodox church. There are concerts in Protestant churches, sometimes in the Catholic, but I have never seen in Bulgaria concerts of classical music being held in church. But here the church “St. Sophia” is much more than a sacred object, it is a cultural seat, added Varbanov.

-I am very happy to have the opportunity to play on this unusual and extremely inspiring place, because I can feel that there is spirituality and holiness that is rarely found somewhere. I also have read that this place is a temple for more than 1000 years and it is very important to me that I played here tonight, says Tarley.

Bulgarian pianist Ivo Varbanov is one of the most famous representatives of the Bulgarian music culture in the world. He started studying at the age of six under the mentorship of Eleonora Karamasheva. His further education was supported by prominent pianist names such as: Ricardo Bertzolo, Ilonka Dekker, Sulamita Aronovski, Frank Vibot, and he also mastered the master courses of Alexander Lonkich, Barry Douglas and Leo Naumov. Varbanov has a rich discography, and in 2014, together with his wife, Fiammetta Tarley, founded his own publishing house – ICSM Records. He performs as a soloist and chamber musician with numerous prominent artists. For the promotion of Bulgarian music outside the country’s boundaries, Varbanov is the winner of the Ivan Vazov Prize, and in 2011 he receives the silver lion award awarded by the Ministry of Foreign Affairs.

Fiammetta Tarley met with a piano at the age of five thanks to Italian pianist Giampiero Smerero, and at the age of nine she held her first concert. She graduated from the Conservatoire in Florence under the mentorship of distinguished professors: Maria Tipo, Lydia Rocheti Pecati and Ilonka Deker. She teach Vocal and instrumental chamber music at the Royal Academy of Music in London. During her active acting and educational work, Tarley also manages and holds a Ph.D. in the field of musicology at Royal College London. She regularly performs in Italy, Germany, Bulgaria, Slovakia, Hungary, Spain, Turkey and the United Kingdom. In the field of chamber music she often performs with her husband, Ivo Varabanov.